Back to Travel Blog

A Pictorial Journey Around West Africa

Native Eye’s Michaela Tart joined our Ouidah Voodoo Festival small group tour, taking in Benin, Ghana and Togo. Her i-phone snaps tell a story of a fascinating trip, well off the beaten track, exploring a region that many have forgotten. Sit back and enjoy this pictorial journey around West Africa.

Visiting at the Temple of Pythons in Ouidah, Benin, where dozens of sacred snakes are housed and worshipped. Snakes are believed to be a powerful voodoo god, and many followers of the religion undergo facial scarification to show their devotion. 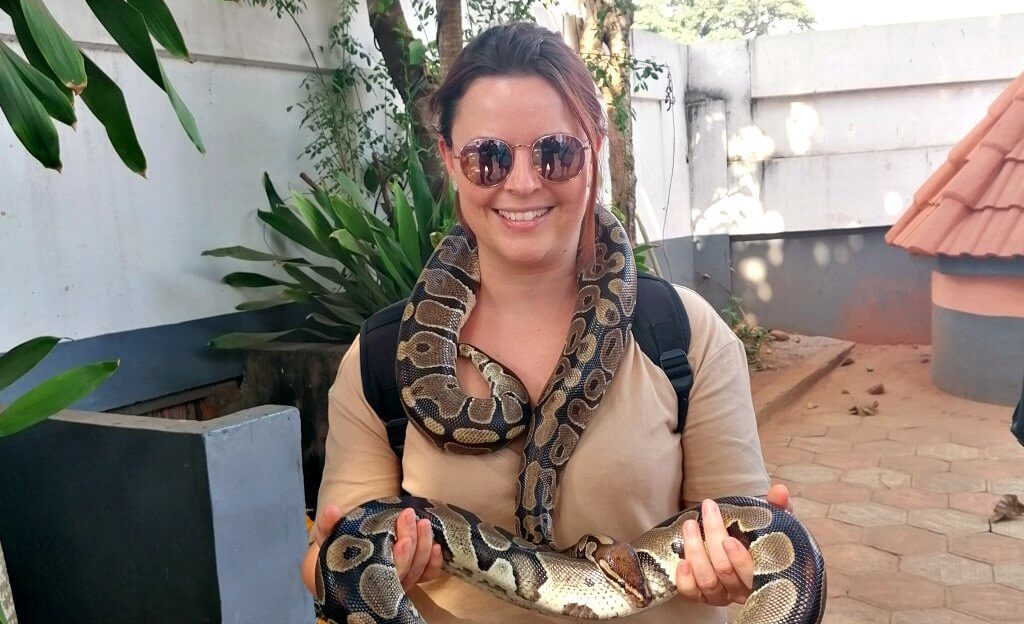 The busy fishing town of Elmina in Ghana, overlooked by one of its two imposing castles – both former holding centres used during the transatlantic slave trade.

The haunting entrance to a dark holding facility in Elmina Castle. Slaves were kept here in solitary confinement as punishment if they didn’t cooperate, which usually resulted in death.

A Tamberma village in northern Togo where I was invited to join in with some traditional dancing.

Tamberma ladies wearing a traditional hat, worn only by married women and given as a gift from their husbands, who make them by hand. The horns represent strength and the cowrie shells represent wealth, to demonstrate that the husband will care for and protect his wife. The hats were surprisingly heavy and uncomfortable!

In the remote Atakora Mountains in north-west Benin, we visited the Taneka people, who made this region their home during the slave trade to evade capture. The men here were preparing for their initiation from boyhood into manhood – an 8-month process which culminates in a ceremony of ritual dance and public circumcision.

A couple of hours outside of Lome we visited a remote village belonging to the Ewe people. A voodoo ceremony was taking place as we arrived, and this lady was in a trance-like state, possessed by a spirit. Voodoo is one of the most important religions here, with many gods responsible for various aspects of life. The ritual we witnessed ended with the sacrifice of a chicken as an offering to the gods, in return for a favour.

Gate of No Return, Ouidah

The sombre ‘Gate of No Return’ in Ouidah – the departure point for slaves crossing the Atlantic and built-in memory of the thousands who never made it back.

A local woman going about her daily business around the stilt village at Ganvie in Benin. We stopped to buy a snack from her, pictured, which tasted similar to a doughnut.

One of many unplanned and interesting roadside stops, where we came across some locals extracting sap from palm trees to produce wine – a traditional alcoholic drink in this part of Africa.

The semi-nomadic Fulani people, tending to their cattle, whose village we visited in Benin. The Fulani are vegetarians, so livestock are used purely for milk.

A traditional healer, the Taneka medicine man in Benin is a highly respected member of the community. He wears only a goat skin, always carries a long pipe and has multiple wives.

See our Ouidah Voodoo Festival small group tour if Michaela’s photos have inspired you, and also check out our West Africa holidays for First-timers post. You can also find out more by jumping to our country overviews for Benin, Ghana and Togo. We are always delighted to talk to customers about our firsthand experiences of exploring this region in depth, so please do ring us on 01473 328456 or get in touch via our website contact page.

Other blogs of interest include:

We use cookies on our website to give you the most relevant experience by remembering your preferences and repeat visits. By clicking “Accept All”, you consent to the use of all the cookies. However, you may visit "Cookie Settings" to provide a controlled consent.
Cookie SettingsAccept All
Manage consent

This website uses cookies to improve your experience while you navigate through the website. Out of these, the cookies that are categorized as necessary are stored on your browser as they are essential for the working of basic functionalities of the website. We also use third-party cookies that help us analyze and understand how you use this website. These cookies will be stored in your browser only with your consent. You also have the option to opt-out of these cookies. But opting out of some of these cookies may affect your browsing experience.
Necessary Always Enabled

Performance cookies are used to understand and analyze the key performance indexes of the website which helps in delivering a better user experience for the visitors.

Analytical cookies are used to understand how visitors interact with the website. These cookies help provide information on metrics the number of visitors, bounce rate, traffic source, etc.

Advertisement cookies are used to provide visitors with relevant ads and marketing campaigns. These cookies track visitors across websites and collect information to provide customized ads.

Other uncategorized cookies are those that are being analyzed and have not been classified into a category as yet.