Georgia – Jewel of the Caucasus

Georgia - Jewel of the Caucasus

Georgia is a land infused with rich and complex traditions that make it one of Europe’s most exciting destinations to visit. This short trip takes you to the heart of an almost mythical land to show you not just the highlights, but also to delve further to reveal the ancient customs and hidden secrets of this enchanting region.

From Tbilisi we head first to Mtskheta, the spiritual heart of the country famous for some stunning UNESCO listed monuments. We then drive into the High Caucasus Mountains and visit the mythical Mount Kazbek, reputedly the site of the Greek fable to Prometheus. Returning to the lowlands we stop at Kutaisi with its striking religious buildings.

We then return once again to the mountains and the wild and untamed land of Svaneti, one of Europe’s most isolated and traditional areas. Here pagan beliefs mix with Christianity. Dominated by dramatic peaks, we explore stone built villages and ancient watchtowers that loom large over the landscape. We meet the Svan people there to learn about their unique way of life and enjoy some of Europe’s finest scenery.

On our return to Tbilisi we explore its multi-cultural influences, from Soviet to Persian and Ottoman, visiting its historic old quarter and the excellent National Museum for an insight into its fascinating history. Georgia is a captivating country where myth and reality intertwine and the past and present blend seamlessly to create an intoxicating atmosphere. Discover an alternative side to Europe with us. 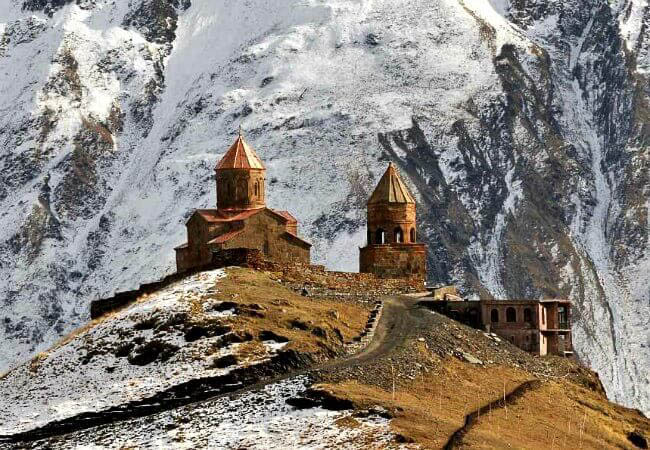 Arrive in Tbilisi and transfer to the hotel. The rest of the day is free to relax or explore. Overnight Sharden Hotel or similar.

Georgia’s rather charming capital is a bewildering combination of cultural influences, from Soviet Russia to ancient Persia and Ottoman Turkey, but despite being located between these three giants it has managed to carve out a unique identity for itself.

Straddling the Mtkvari River Tbilisi – formerly known as Tiflis by the Russians – has a rather easy going air, with wide boulevards and public squares where old men play board games under the shade of trees, and is a very pleasant place to explore on foot. Georgia’s Christian heritage is evident here and the city is home to a number of fine churches and cathedrals, one of the most impressive of which is the Sioni cathedral dating back to the 13th century.

As well as these, a stroll around central Tbilisi will bring you to old caravanserais and bathhouses, synagogues and mosques – Tbilisi is more cosmopolitan than one might think. The city is also home to some excellent museums – the National Museum, in particular, holds some exquisite examples of early gold jewellery which give credence to the theory that Georgia was the original ‘Land of the Golden Fleece’.

Drive to Mtskheta, Georgia’s ancient capital where we visit the UNESCO listed Jvari Monastery and the striking Svetitskhoveli Cathedral. From here we head north along the Georgian Military Highway, crossing the Jvari Pass en route to Kazbegi, surrounded by the High Caucasus Mountains. Hike to the picturesque Sameba Church with views of Mt Kazbek in the background, then drive to Gudauri for the night. Overnight Hotel Alpina or similar. (B)

Please note – there is the option to travel up to the Sameba Church by vehicle if you’d prefer not to do the hike.

Returning to the lowlands we visit Gori, the birthplace of Stalin, and the cave city of Uplistsikhe, dating back to the 7th century BC. Arriving in Kutaisi we visit the UNESCO listed Gelati Monastery, founded in the 12th century, and the Bagrati Cathedral. Overnight local guesthouse. (BD)

Drive to the almost mythical region of Svaneti, high in the Caucasus Mountains and home to the Svans, perhaps Georgia’s most traditional ethnic group. We head to the town of Mestia, known for its typical architecture and dominated by defensive stone towers. We stay tonight in a family-run guesthouse where you can expect to be treated to some typical Georgian hospitality. (BD)

The remote region of Svaneti, high up in the Caucasus mountains, is a throwback to a bygone age when this was a truly wild frontier of Europe. Populated by the Svan people, the medieval style villages here consist of stone built houses clustered around imposing watchtowers, most of which are between 800 to 1000 years old and served as a lookout post to warn of potential invaders.

The Svan people make up a distinct ethnic group and have always been fiercely protective of their independence, functioning as a de facto autonomous state in the days before Soviet rule. They have their own complex set of traditions and customs, and in the past have been known as an aggressive and hostile group, suspicious of outsiders and renowned as warriors.

Many of the churches in the region hold fine frescoes but the Svan are more traditional than the Georgians of the lowlands, and in places you can still find evidence of earlier, non-Christian beliefs. As Svaneti was never conquered by the Mongols during their rampage through this region, Svaneti became a repository for many of Georgia’s religious artefacts.

The scenery here is truly stunning, as you might expect from Europe’s highest mountain range, with snow-capped peaks ranging up to 5000 metres, forests and gushing rivers, and offers excellent opportunities for hiking. Both the landscape and the cultural traditions have led to Svaneti being designated a UNESCO World Heritage Site.

Svaneti is also home to Europe’s highest permanently inhabited village Ushguli, situated at 1800m and with great views of the mighty Mt Shkhara, at 5201 metres the highest peak in Georgia. This is a rather magical place, full of the traditions of yesteryear and the hospitable ways of the Svans make this an experience you are unlikely to forget.

A full day exploring this stunning region. Drive to the village of Ushguli with its medieval buildings, watchtowers and the Lamaria church, and with a backdrop of Mt Shkhara, Georgia’s highest mountain. We explore the landscape on foot, taking easy walks nearby and also visit a local house to learn more about the unique customs of the Svan people. Return to Mestia for the night. Overnight family-run guesthouse. (BD)

Explore this interesting city and learn about its long and fascinating history. Visit the old town, the Metekhi Temple and the fortress of Narikala before heading to the impressive National Museum with its rich collection of cultural artefacts. We also explore the 11th-century Sioni Cathedral and take in the sights of Rustaveli Avenue, Tbilisi’s main thoroughfare. Overnight Sharden Hotel or similar. (B)

Transfer to the airport for departure. (B)

Please note that this trip is part of a longer three-week tour travelling overland through Azerbaijan, Georgia and Armenia and so while some people will be starting their tour in Tbilisi and visiting only Georgia, others will arrive overland from Azerbaijan and be continuing on to Armenia. If you would like information about our tour combinations in the Caucasus region please let us know.

Americans, Australians and most European nationalities, including British citizens, no longer require a visa to enter Georgia. Visa regulations can change however and so we recommend that you contact your nearest embassy for the most up to date information.

We are not medically qualified and so we recommend that you speak to your doctor or nearest health professional for advice concerning recommended vaccinations. However, there are no compulsory vaccinations needed to enter either country. For more advice on vaccinations, you can also visit www.fitfortravel.nhs.uk.

Georgia’s currency is the lari, and it’s unlikely you will be able to obtain this from your local exchange bureau. We recommend taking either US dollars or Euros to exchange – British pounds will be much harder to change.

Changing money is fairly simple – many hotels will offer this service and there are also banks and exchange bureaus in larger towns. Your guide will be able to advise of the best option. In Tbilisi there are also ATMs which accept foreign cards, although don’t count on these always working. Credit cards are not used as widely here as they are in other European countries, so you should only think of this as a back up rather than the main source of obtaining money.

When travelling in countries such as Georgia, which are comparatively underdeveloped in places, it’s important to understand that things won’t always work here as we’re used to them working at home. Travelling in underdeveloped and untouristed destinations requires both patience and a sense of humour. There may be problems with infrastructure, attitudes may be different, and maintenance may not be as high a standard as we would always like, but this is very much part and parcel of travelling in such a place. We aim to resolve any issues as quickly as possible, and thank you for your patience.

We keep a very close eye on the travel advice issued by the UK Foreign and Commonwealth Office so that we can keep you up to date with any warnings. At the time of writing, there are no warnings against travel to the parts of Georgia that we visit. 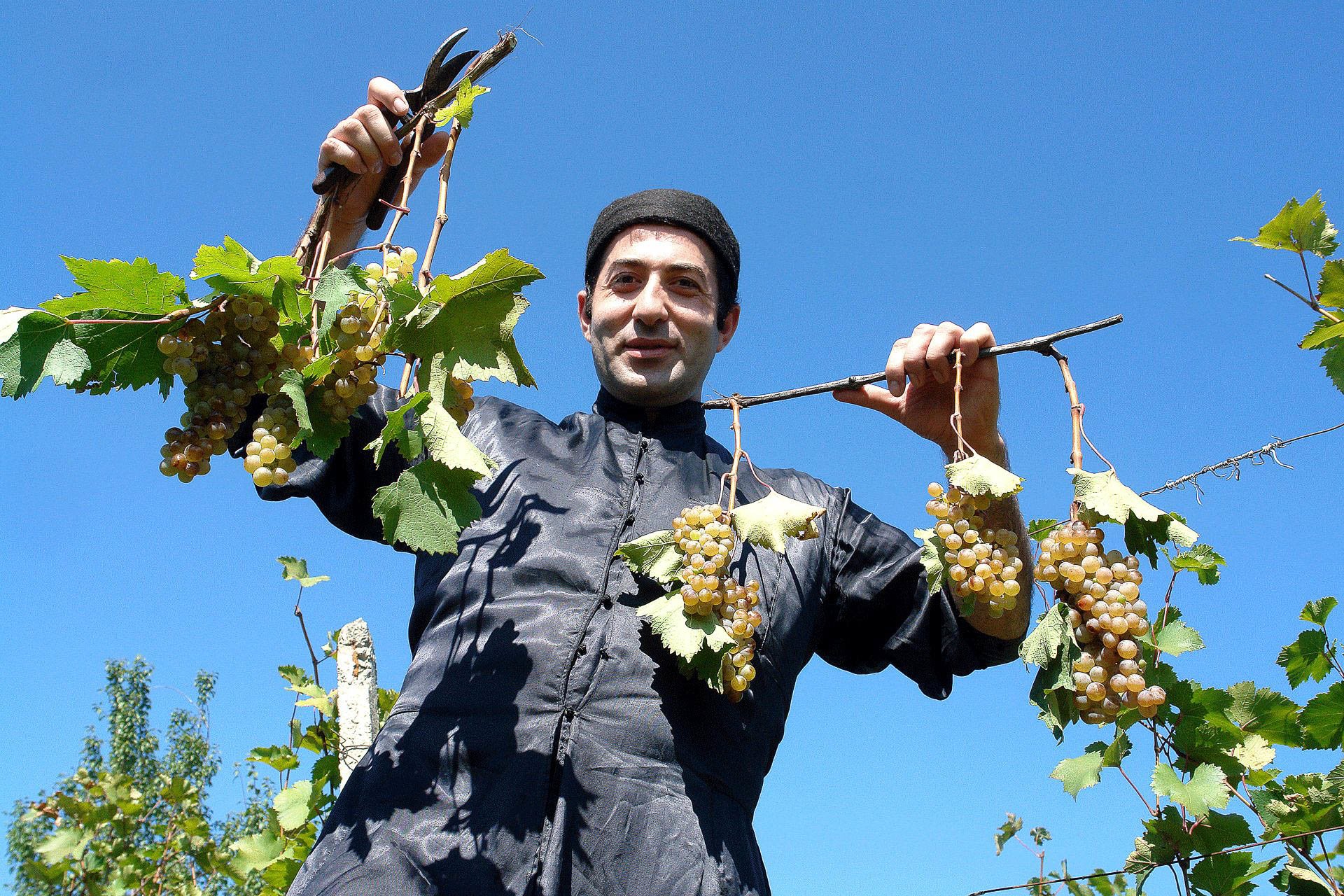 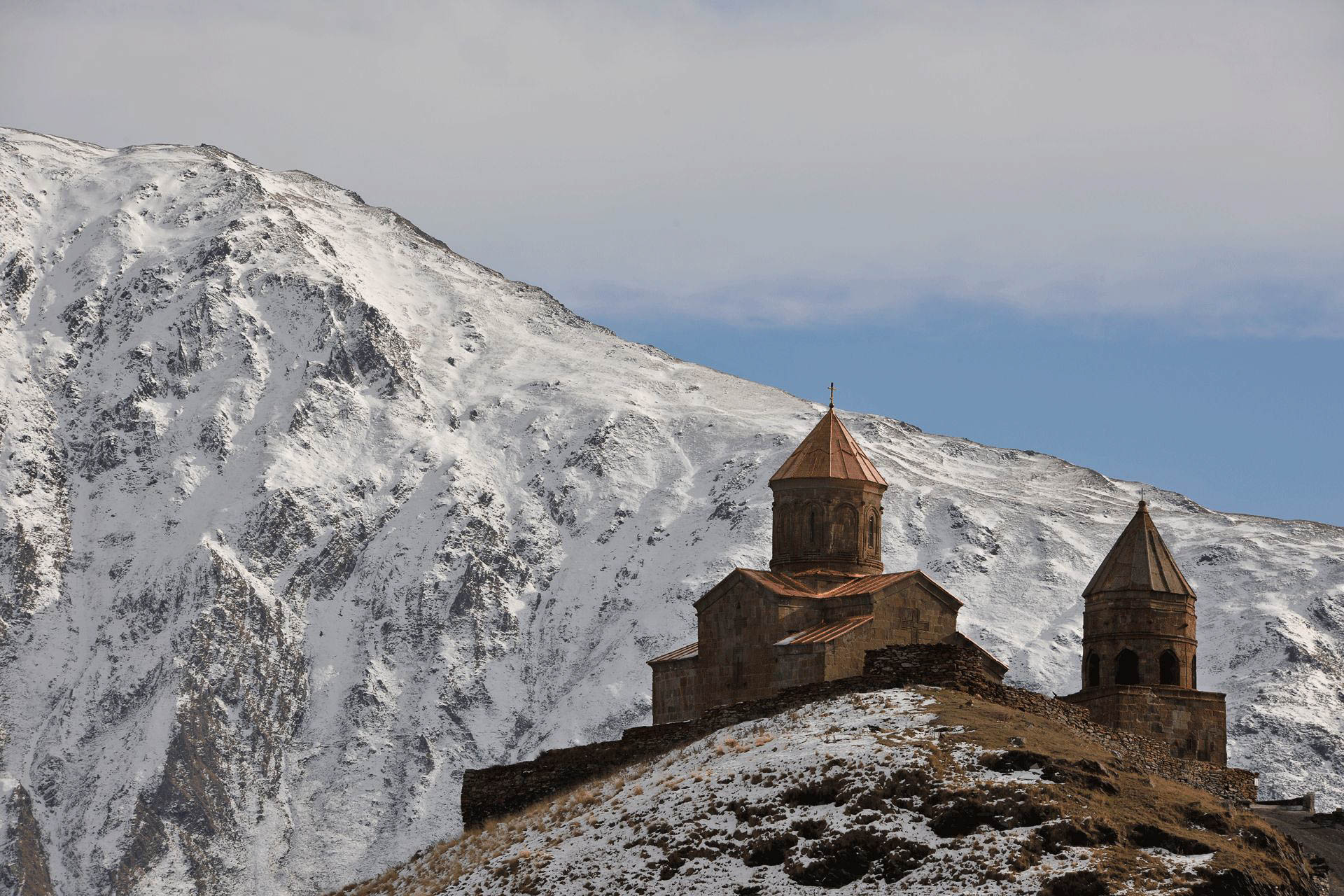 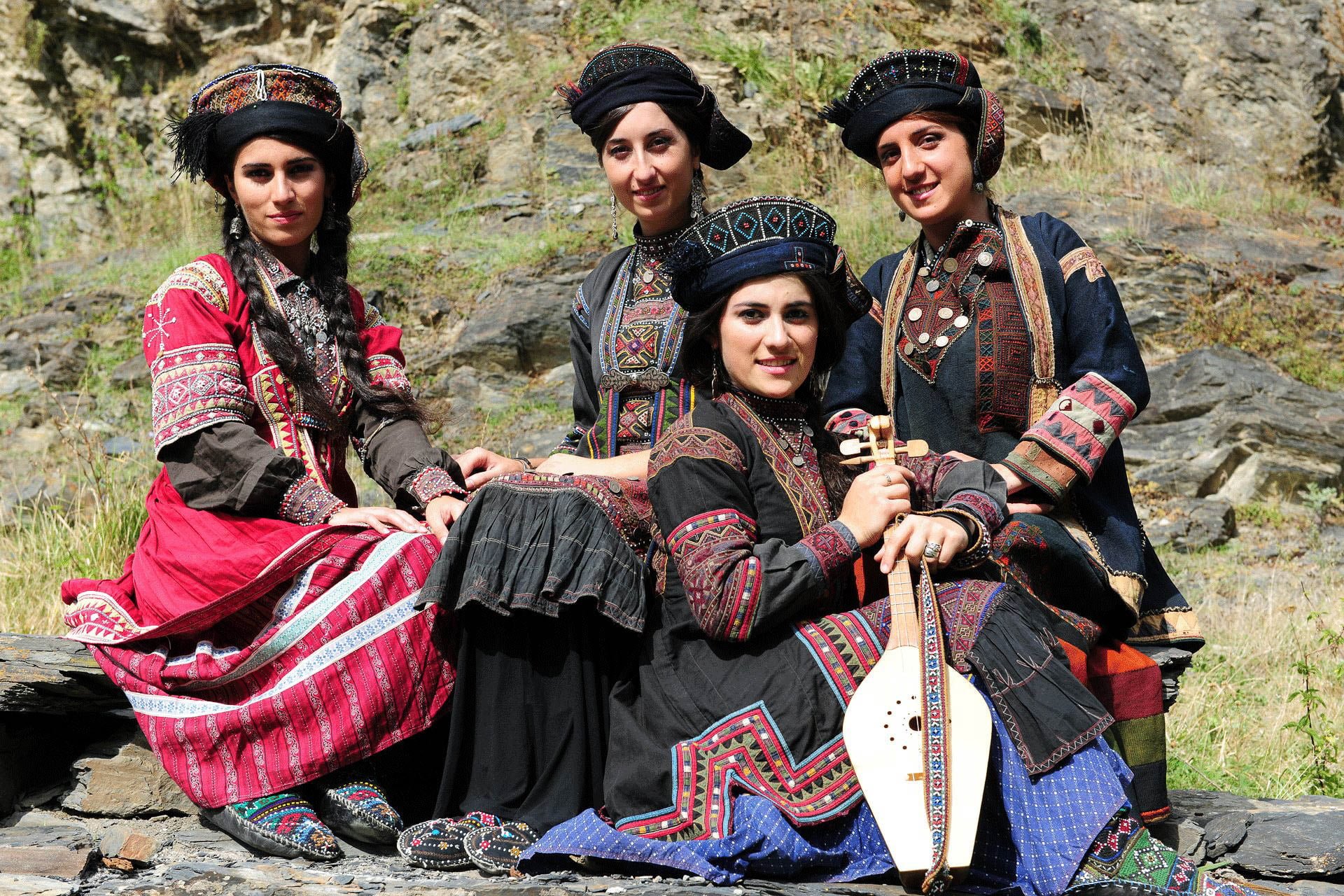 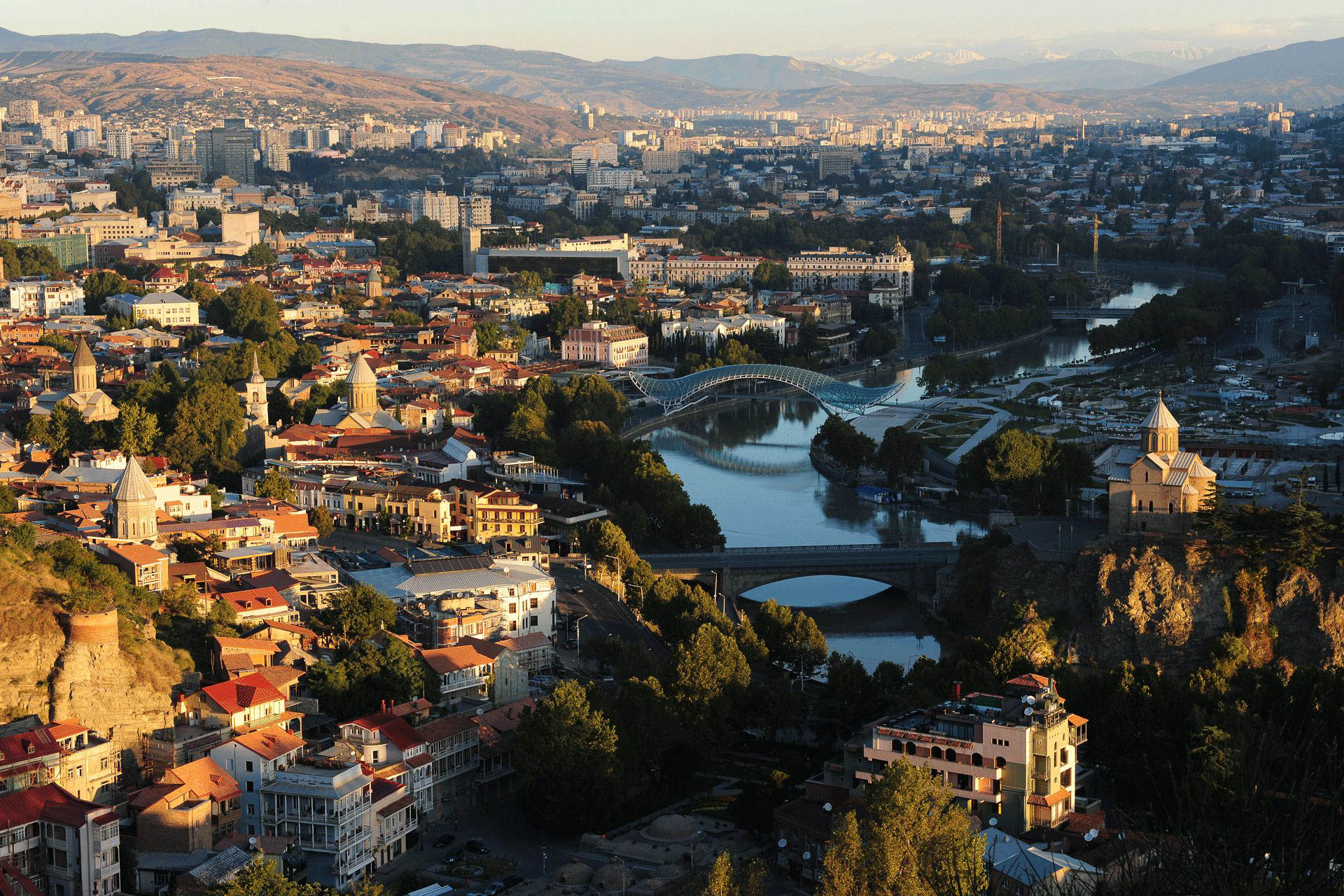 " Georgia completely amazed me - such a beautiful place, lovely people and a history that I knew very little about. Svaneti and Tusheti were, without doubt, the highlights and it was a real privilege to be invited into local homes here, it was a great way to see how local people live away from the cities. "
Samantha Britton
" Our guide was Giorgi Zangaladze and our driver was Zurab Kalandadze, and what a wonderfully excellent team they were. They really made the visit a fantastic experience for us and gave us memories that we will remember and cherish for many years to come. They were a credit to themselves and their country. "
Derek and Anne Rowlands
" The group size of only 4 was a pleasant surprise and added value to the trip Our guide Sopo and the driver were very professional and informative. The coverage of the country was good in terms of major sights covered, and I returned with a good idea of the nature of the country and its complex history/people. "
AC
NEWSLETTER
TRAVEL BLOG
ABOUT US
CONTACT US