Kenya is renowned for its wealth of wildlife, the sweeping plains of the Masai Mara, and its white sand beaches. But look beyond these stereotypes, glorious though they are, and one can find a diverse kaleidoscope of ethnicities and tribal groups, far removed from the tourist trail and virtually unchanged for generations.

On this expedition we head north from the capital into the tribal heartlands that stretch towards the borders with South Sudan and Ethiopia, taking challenging routes and driving through remote areas to meet some of Africa’s most traditional groups. In the harsh lands of the Kaisut Desert we meet the Samburu and Rendille people, pastoralists who compensate for their austere surroundings with stunning body decorations and enormous beaded necklaces.

Pushing further north we drive to the ‘Jade Sea’, the vast waters of Lake Turkana – one of East Africa’s most remote regions. Here we meet the Turkana people, a proud warrior people who held out against colonial domination until the 1950s, and who still retain a fierce independence from central government. Continuing to the Chalbi Desert we head for the oasis of Kalacha, a centre for the Gabbra people, camel herding nomads who eke an existence from this unforgiving land.

Returning south we stop at Samburu Game Reserve – no visit to Kenya would be complete without at least a little wildlife, after all. We spend a day here on game drives looking for lion, elephant and some of the species which are seldom found elsewhere, such as gerenuk and beisa oryx.

This is a trip through some of East Africa’s most isolated regions – you can expect some full days of driving on rough and non-existent roads to reach these communities, and at times it may be challenging. The rewards however are great – to meet proud warriors and nomadic communities following in the steps of their ancestors, with little influence from the modern world, masters of their own lands yet welcoming to visitors. This is Kenya with a twist, and unlike you have seen it before.

Arrive in Nairobi. The rest of the day is at leisure. Overnight Safari Park Hotel or similar.

A full days drive north towards Nanyuki and Mount Kenya, crossing the equator and heading to the lands of the Samburu and Rendille people at the base of the Ndoto Mountains and the vast Kaisut Desert. Overnight camping. (BLD)

We spend these days exploring the lands of the Samburu and Rendille people, two of Kenya’s most striking ethnic groups, visiting their settlements and learning about their way of life in this harsh corner of the country. Overnight camping. (BLD)

The Samburu people are closely related to the better known Masai and share many of the same characteristics; both are pastoralists with a lifestyle centred around finding grazing for their cattle, and both have a distinct social structure based on age groups. They are the most northerly of the Maa speaking groups, and often refer to themselves as Loikop – ‘those who have territory’, a fierce and proud statement of their success in defending themselves against the equally fierce and proud tribes to the north.

The Rendille are a Cushitic speaking ethnic group who are often referred to as ‘the holders of the stick of god’. They are nomadic pastoralists who roam with their camels, goats and more recently cattle across a vast swathe of northern Kenya. The Rendille live in semi-permanent villages that are moved only a few times each year, and rarely more than a few kilometres.

Drive across some of East Africa’s most dramatic scenery, through the South Horr Valley. In the late afternoon of Day 5 we arrive at Lake Turkana. The frontier town of Loyangalani is a melting pot of ethnic groups, and divides neatly into tribal zones; the Samburu, Turkana and Rendille have each made one part of the town their home. Day 6 is spent exploring this fascinating landscape, meeting the Turkana, El Molo and other groups. Overnight Desert Museum bungalows or similar. (BLD)

The Turkana people are renowned for their fighting prowess and are recently thought to be the oldest tribal society in the world. The Turkana can trace their origins to the Dodoth escarpment in north-east Uganda, and their related tribal allies the Karamojong. Legend has it that two to three hundred years ago the tribe started to move east. This powerful and influential people, who number over a quarter of a million, mostly live on the western flank of Lake Turkana.

A full days drive to Kenya’s remote northern frontier, eventually arriving at Kalacha, a desert oasis that sustains the Gabbra people and their cattle during the dry season. On Day 8 we spend time meeting the Gabbra in the Chalbi Desert. Overnight camping. (BLD)

The Gabbra follow a traditional age-set system, common amongst the northern nomads, of passing through distinct age groups every seven years. Each age group elects two leaders or ‘hayu’ to act as their representatives at meetings known as ‘dabela’ and convened by the tribal elders. The Gabbra calendar consists of a remarkably accurate 365 days but no leap year. Their religious worship is intended to create ‘nagaya’ (peace) through appeal to Waqa, the god of rain and peace.

Drive south to Namunyak, close to Samburu Game Reserve. On Day 10 we have a choice of either hiking up Sabache mountain or heading into Samburu game reserve for a game drive. Samburu is home to a number of species rarely seen elsewhere such as the reticulated giraffe and gerenuk. The afternoon is spent meeting the Samburu people. Overnight tented camp. (BLD)

Samburu Reserve is located on the banks of the Ewaso Ngiro River, and is famous as the location where Joy Adamson raised her lioness, Elsa. It is home to a wide variety of wildlife – of the big cats, lion, leopard and cheetah are found here, as well as buffalo and elephant. The last of the ‘big five’, rhino, has been poached out of existence in the reserve. Samburu is well known for providing a habitat for species that are difficult to find in other parks, namely beisa oryx, Somali ostrich, gerenuk, reticulated giraffe, Grevy’s zebra and Guenther’s dik-dik, and is also home to over 350 bird species.

Return to Nairobi and transfer to the airport for departure. (B)

Please note: You will not arrive back into Nairobi until late afternoon and so should not book any flights until the evening. 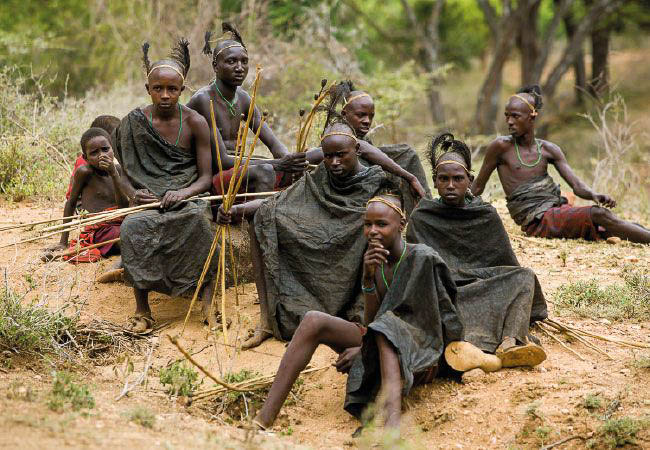 Most travellers will require a visa to enter Kenya, which can no longer be obtained on arrival and must be applied for as an e-visa via the following website:

You will need to have six months validity left on your passport and have two blank pages.

Visa regulations can change though, so we recommend that you check the situation again two months before travel.

The local currency in Kenya is the Kenyan shilling. The only real place to change money on this trip is Nairobi, and your guide can assist with this.

We keep a very close eye on the travel advice issued by the UK Foreign and Commonwealth Office so that we can keep you up to date with any warnings. At the time of writing the FCO does not advise against travel to the parts of Kenya that we visit on this trip.

" The group was small, and there was a friendly, cooperative & comfortable atmosphere amongst us five. All extremely well travelled, so lots of stories and new ideas. No glitches whatsoever! The services of the local team were excellent. The facilities, both hotels and camping, exceeded my expectations. "
Lies Ouwekerk
" This trip was fantastic, it was great to meet all the different colourful people of Northern Kenya from the Samburu to the Gabbra. I was expecting it to be quite basic but in fact it was quite luxurious with superb food all with wine and beer! A good itinerary and it was great to finish in the Eco lodge with a safari. "
Brian Penny
" This was a wonderfully thought-out and well organised tour and I couldn’t find fault. The guide was excellent, the accommodation exceeded expectations and our individual needs were accommodated for as much as possible. The local team, and the team at Native Eye HQ, were helpful, flexible and patient. "
Gill Chesterfield
" The trip was fantastic! From beginning to end it was quite an experience and when we first viewed Lake Turkana, it almost felt we had reached the end of the known world. At times while trying to walk in gale force winds and 100-degree temperatures, I must admit I questioned my sanity for being there. But it was an experience like no other and I'll never forget it. "
Joanne Shirley
NEWSLETTER
TRAVEL BLOG
ABOUT US
CONTACT US

We use cookies on our website to give you the most relevant experience by remembering your preferences and repeat visits. By clicking “Accept All”, you consent to the use of all the cookies. However, you may visit "Cookie Settings" to provide a controlled consent.
Cookie SettingsAccept All
Manage consent

This website uses cookies to improve your experience while you navigate through the website. Out of these, the cookies that are categorized as necessary are stored on your browser as they are essential for the working of basic functionalities of the website. We also use third-party cookies that help us analyze and understand how you use this website. These cookies will be stored in your browser only with your consent. You also have the option to opt-out of these cookies. But opting out of some of these cookies may affect your browsing experience.
Necessary Always Enabled

Performance cookies are used to understand and analyze the key performance indexes of the website which helps in delivering a better user experience for the visitors.

Analytical cookies are used to understand how visitors interact with the website. These cookies help provide information on metrics the number of visitors, bounce rate, traffic source, etc.

Advertisement cookies are used to provide visitors with relevant ads and marketing campaigns. These cookies track visitors across websites and collect information to provide customized ads.

Other uncategorized cookies are those that are being analyzed and have not been classified into a category as yet.